Tinder is struggling to attract younger users who are beginning to abandon the world’s dominant dating app as Gen Z singles favor new, hotter services in the search for post-lockdown love.

The well-known app has quickly become the dating service of choice for millennials since its launch in 2012, as consumers transitioning from desktop to mobile leave legacy platforms such as eharmony and Match.com.

The latest generation of young people, returning to the dating scene after the pandemic, also seem to be turning to alternatives to Tinder in the hunt for romance.

Downloads of Tinder, which allows users to accept or reject potential partners by swiping a smartphone screen, fell 5% in 2021 to 70.7 million. Rivals such as Bumble and the new start-up Thursday have seen steady growth, according to new figures from researchers in the data.ai app market.

This trend has led Tinder to make changes in an effort to achieve further growth, from restructuring its leadership to betting on the so-called metaverse as the future method by which people will meet online.

“New users remain a challenge and this is where product innovation comes in. We need to give people a new reason to get into the [dating app] category, they haven’t had anything new and exciting in a while.

His comments come just weeks after Match said Tinder failed to meet revenue growth expectations in its second-quarter results, ousting the company’s chief executive, Renate Nyborg, after less than a year in the role.

Match, which owns a slew of dating sites, including established brands like Plenty of Fish and OKCupid, needs Tinder to maintain its dominant position in the market. The app generated $1.65 billion in revenue last year, more than half of Match Group’s total revenue.

The group’s share price has fallen more than 50% this year, with its legacy platforms, such as Match.com, suffering a drop in revenue and paying users.

“It’s up to us to figure out what the next big thing is. [in dating]”, Swidler said. “It tends to come with evolution or technological revolution.”

One of Tinder’s big bets is the metaverse, where enthusiasts believe people will increasingly interact in virtual environments. Tinder does this by further gamifying the app, hiring executives from game companies Zynga, Electronic Arts, Glu and King in recent years to bolster its offering.

The platform is struggling to execute on this vision, canceling its virtual coins feature this month, used for in-app spending, having only launched in November, after seeing mixed results.

The company is still investigating how these features can effectively contribute to Tinder’s revenue and is currently re-evaluating the model. It plans to relaunch coins and introduce virtual goods on Tinder in the second half of 2023.

“A lot of older people use Tinder now,” Swidler said. “If you’re looking for someone who’s a teenager and wondering what they’re going to use in a year or two when they’re eligible for the dating app? That’s the audience we need to look at, the Gen Z audience.”

Reaching this audience is a challenge. More than 90% of this generation feels frustrated with dating apps, according to research agency Gen Z YouthSight. They also feel less likely to be in a relationship, with 40% of respondents saying they are ‘happily single’.

Millie Shields, a 24-year-old influencer who creates TikTok dating videos, said Tinder has a negative reputation, known for dating rather than long-term dating.

“[Young people] tend to want to meet someone organically rather than forcing them onto a dating app,” she said, adding that many people only use Tinder for entertainment.

Swidler said that stereotype was “hard to shake” but the platform had now evolved and was aiming to make it a safe and positive space, including the launch of a membership for women later this year. .

“The main thing is that the user experience is up to standard, making sure you’re actually tackling the issues that young people are very outspoken about. [like] abuse, harassment and unpleasant experiences,” said Rebecca McGrath, senior technology analyst at market research provider Mintel.

“Tinder has tried to address these other areas like currency and talking about the metaverse and . . . that’s not necessarily where they need to focus.

Match doesn’t share age or gender demographic numbers for Tinder, but estimates from data firm App Ape suggest that 76% of U.S. Tinder users are male. The design of rival app Bumble means women have to initiate conversations on the platform – only they can send the first message to potential suitors.

Bumble increased downloads by 20% last year to 21.1 million, according to data.ai, while the fledgling Thursday app that encourages in-person meetings grew from less than 1,000 downloads in 2020 to more 200,000 last year and another 100,000 in the first quarter of this year.

The introduction of game-inspired features and new subscriptions are aimed at increasing revenue, as Tinder’s model relies on users paying for subscriptions or one-time expenses.

In the second quarter of this year, Tinder had 10.9 million paying users, a 14% year-on-year increase, or more than 60% of Match Group’s total paid users, who spend an average of 15, $86 per month.

By comparison, Bumble has over 1.9 million paying users, spending just under $30 a month on average.

Both Tinder and Bumble declined to provide figures on the total number of users, including those using the app for free. 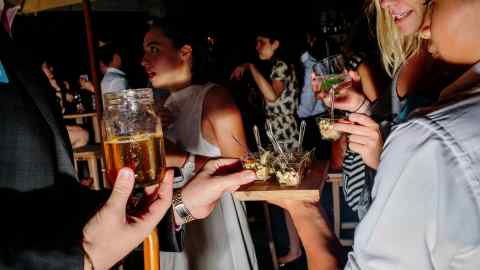 However, as the cost of living rises, consumers are cutting back on discretionary spending such as digital subscriptions, which the company says will impact revenue.

“Paying even a small amount for online dating is probably a pretty easy cut for a lot of people if they can have a pretty equivalent free experience,” McGrath added.

Swidler remains confident about Tinder’s prospects. “Tinder is still the biggest dating company in the world,” he said. “And that has a significant advantage because if you want to meet people, the best place to go is where there are a lot of people.”

TikTok nears resolution of US security issues with Biden administration

Why do SBI, HDFC and ICICI Bank have the lowest market share in UPI?